Trending
You are at:Home»Debbie Gross 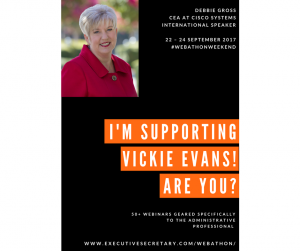 Debbie Gross, Chief Executive Assistant, Cisco, has over 30 years of experience in the administrative field.

She joined Cisco Systems in March, 1991 as the executive assistant to John Chambers, then Senior Vice President of Worldwide Operations. As the company grew, her responsibilities grew together with Chambers. In 1995, when Chambers became President and CEO, Debbie Gross assumed the lead role leading Cisco’s global 1000+-person administrative team.

Debbie is considered a leader in the promotion of Cisco administrative programs. She is a member of the California UCSC Extended Campus Board for Curriculum Development, and is a Guest Lecturer there.   She is one of the original founders of the SVCA (Silicon Valley Catalysts Association) which is a 25member organization of Executive Assistants who support CEOs in the Silicon Valley. In addition, this past year she was the recipient of the Colleen Barrett Award for Administrative Excellence, the highest award given by the Admin Awards of Silicon Valley.

To be a Game Changer in mastering your executive’s time  and their calendar you need to;

– Understand the “Rules” of the Game

– Calling the “Plays” of the Game

– Then Playing to win!

This webinar will take a deeper dive in to proven calendaring strategies that will make any administrative professional a “Master” in managing their executive’s time and a true Strategic Business Partner.

Book Debbie’s session (as well as over 50 others) for just $49 at http://executivesecretary.com/webathon/ and help us to support Vickie Sokol Evans.