Trending
You are at:Home»Donna Coulling 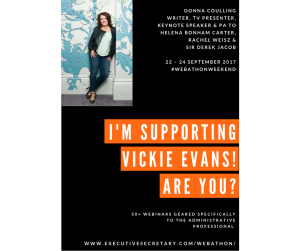 Donna is the personal assistant to Helena Bonham Carter, Rachel Weisz, Sir Derek Jacobi, Samuel West and Harland Miller, she has been in this role for over sixteen years. She lives in North London with her daughter and a tortoise.

She is also known as an expert in her field and has made many television appearances as a Celebrity Personal Assistant including:

As a TV Presenter in her own right she is regularly seen presenting several fashion brands on QVC and can currently be seen on several infomercials on UK TV for various kitchen gadgets and the MacMillan Cancer Coffee Campaign for TV and Cinema. In 2015 she also performed as a presenter in the hugely popular theatre production You Me Bum Bum Train in London’s West End.

Donna has further presented at PA Events including Behind Every Leader conference in LA, World of Executive PA in Kuala Lumpur, The Corporate PA Summit in Perth, Australia and the 5th National EA & PA Convention in Sydney, office* show in Sydney and London, The Corporate PA Summit in Auckland and then closer to home Donna has presented at the Conference and Hospitality Show in Leeds, ExecSec Summit London, The PA Hub York, Manchester PA Network, Wales NHS PA Conference to name a few. 2016 highlights also included hosting a pilot for the game show Categorical and appearing in the short film Singularity. 2017 so far, includes lecturing for the Angela Mortimer Business Executive Academy in London, guest speaker at the Odeon Cinema PA training day in Manchester and at various PA networking events nationwide.

She has had features written on her and her work in various publications including Easy Living Magazine, Executive PA Magazine, Executary News, PA Life Magazine, the Mayfair Times, The Independent and Women’s Health and Fitness.

Donna launched her first e-Book in the summer of 2014 ‘The Chamber of Celebrity PA Secrets’, which is available worldwide on Amazon, and runs her own website www.donnacoulling.com.

The Importance of Networking and Building your Little Black Book

I’d be nothing without networking; when I started out as a celebrity PA I knew no-one. I quickly realised that I needed to create a support system around me,  plus a reliable little black book of contacts. Here I tell you how I started out, how I built my relationships, my networking fails – and successes –  and how I continue to maintain that all important Little Black Book.

Book Donna’s session (as well as over 50 others) for just $49 at http://executivesecretary.com/webathon/ and help us to support Vickie Sokol Evans.

Find out more about Donna at her website http://donnacoulling.com