Trending
You are at:Home»Gill Quirk 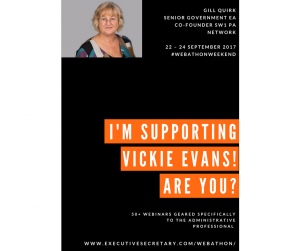 Gill Quirk from London is EA to the Defence Senior Advisor Middle East at the UK Ministry of Defence, a Deputy Head of Secretarial Profession Co-Founder of Network PA SW1 and on the Regional Board of the UK’s Executive and Personal Assistant Association.  Originally from the Isle of Man, she has worked for the Ministry for over 30 years having worked her way up the career ladder from office junior. During her varied career Gill has worked for the Finance Director, the Surgeon General, learnt Greek for a posting to Athens and worked on a State Visit to Malaysia by HM The Queen and HRH The Duke of Edinburgh.

Network PA SW1 has been running for over four years during which its co-founders and members have discovered many real benefits of networking.  Gill (and Catherine Williamson) will share real examples of these with those joining the webathon from their own unique perspectives.

Book Gill & Catherine’s session (as well as over 50 others) for just $49 at http://executivesecretary.com/webathon/ and help us to support Vickie Sokol Evans.