Trending
You are at:Home»Libby Moore 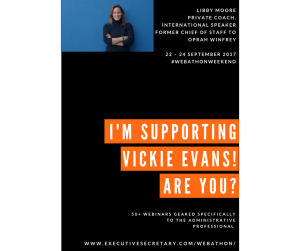 Libby Moore is a Certified Life Coach, speaker/story teller, adventurer, and creative connector, who loves inspiring people to reconnect to Possibility in their life and career. Prior to this, Libby served as Chief Of Staff to Oprah Winfrey for 11 years, through the end of The Oprah Winfrey Show.

She also worked as a consulting Producer with the original team that created the Emmy award winning, Super Soul Sunday on OWN, The Oprah Winfrey Network, Prior to her years with Oprah, Libby was an executive assistant to Jann Wenner of Wenner Media, publishers of Rolling Stone, US Weekly, and Men’s Journal. It was a position she held for four years. Before the magazine world, Libby collected great stories through two years of random-crazy-NYC-freelance jobs, all while advancing through comedy improv workshops at Gotham City Improv, and performing in the sketch comedy group, Urban Side Effects.

Before jumping into the comedy world, Libby was personal assistant to Maury Povich, who she credits for launching her Executive Assistant career, (even though she failed typing in College). Early in her career, Libby worked on Boston’s North Shore in radio and print at: WFNX Radio, The Marblehead Reporter, and WNSH Radio. She currently lives a creative and inspired life, splitting her time between sweet spots on both the East and West Coasts of America.

What is the link between a Chief of Staff to Oprah, an Assistant at Rolling Stone and a janitor?

Libby Moore was all three.  Lucy Brazier sits down with Libby to ask her all about her roller coaster career. In an intensely personal interview, Libby explains how setbacks in your life may ultimately be the stepping stones to what you are meant to be doing.

Book Libby’s session (as well as over 50 others) for just $49 at http://executivesecretary.com/webathon/ and help us to support Vickie Sokol Evans.