Trending
You are at:Home»Reggie Love 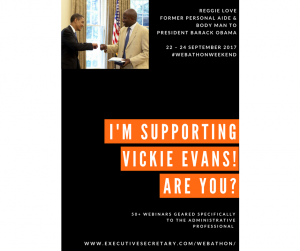 In this incredible session, Reggie Love shares his unique perspective on what it was like working for the leader of the free world. Beginning with his first interview for a job in the mailroom, Reggie tells Lucy Brazier how he became Obama’s ‘surrogate son’ and explains what life with Obama was really like. How did it feel to keep the President company at every major turning point of his historic first campaign and administration? How do you own up to (temporarily) losing the President’s briefcase? And what were the career highlights? This is a coming of age story. His time with Barack Obama taught Love, who was only 23 when he began working for the then Senator, how persistence and passion can lead not only to success but to a broader concept of adulthood.

Book Reggie’s session (as well as over 50 others) for just $49 at http://executivesecretary.com/webathon/ and help us to support Vickie Sokol Evans.