Trending
You are at:Home»RoseMarie Terenzio 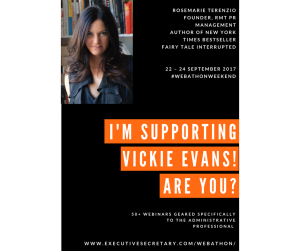 RoseMarie Terenzio is a public relations and strategic communications expert. She was also  John F. Kennedy, Jr.’s chief of staff from 1994 until his death in 1999.

She has worked in media, politics, crisis communications, publishing, hospitality, fashion and technology.  RoseMarie has consulted for major media outlets like ABC News, 20/20 and Good Morning America and worked with brands including NOBU, Lucky Brand, Me & Ro Jewelry, and tech companies like Moven, Synechron and Hackateer Ventures. Her crisis clients have included, Stephanie Madoff and Aaron Fisher, known as Jerry Sandusky’s “Victim 1” in the Penn State sex abuse scandal, among others. Prior to launching RMT, RoseMarie served as John F. Kennedy, Jr.’s chief of staff from 1994 until his death in 1999. She oversaw Kennedy’s public relations and philanthropic causes, and served as a board member for his nonprofit, Reaching Up.

RoseMarie then worked for the Democratic National Committee managing celebrity outreach and producing media appearances for presidential campaigns. RoseMarie produced the documentary, “I AM JFK JR.” for SPIKE TV and national theatrical release. She also led media efforts for Madonna for the EPIX film premiere, “Madonna: The MDNA Tour.”

RoseMarie is the New York Times bestselling author of, “Fairy Tale Interrupted: A Memoir of Life, Love and Loss.” She has contributed to and appeared on Good Morning America, The Today Show, CBS Saturday Morning, PBS, CNN, Vanity Fair, Forbes, People Magazine, The Huffington Post, The New York Times, The New York Post, The Boston Globe and The Washington Post. She is a member of the advisory board of myFace.org and has been featured panelist and a mentor at SXSW.

RoseMarie will be talking about her time working with JFK JR at George Magazine and offering tips for EAs that want to operate at the highest level. In this inspirational interview, RoseMarie lifts the lid on what it was like to work for one of the US’s most iconic figures and speaks movingly about what it was like to be JFK JR’s EA in the aftermath of his untimely death.

Book RoseMarie’s session (as well as over 50 others) for just $49 at http://executivesecretary.com/webathon/ and help us to support Vickie Sokol Evans.