Trending
You are at:Home»Technology»Twitter for Administrative Professionals
By Donna Gilliland on September 26, 2016 Technology

Twitter is an information network. Tweets are brief 140-character messages. It’s like a newspaper headline – brief.  Messages are happening in real time. Think of Twitter as place of discovery where you can follow accounts on topics that matter the most to you.

Starting without a strategy for use can result in confusion, frustration and possibly totally abandoning the use of this powerful platform. Begin by consuming information first, in order to get a sense for how Twitter works. When you are more familiar and have a clear strategy for how you are going to use Twitter, then you can begin to send out messages into the Twitter feed.

Start by making a list of topics that are of personal interest to you. My suggestion is to create the list by categories of interest. For example news, travel, education, entertainment, celebrities, customers and friends. Once created, look for the accounts on Twitter that are within your categories of interest and read through the tweets of these accounts before you follow. Doing so will enable you to determine if the information being tweeted contains anything useful to you. If not, don’t follow because it will just create noise in your personal Twitter stream that you don’t need.

A Twitter chat is a public conversation which surrounds a specific hashtag. Hashtags, in case you aren’t familiar, are used to aggregate what is being tweeted to a central place of access. When a word is preceded with a hashtag (#) it becomes a live link to all tweets that use that hashtag.

“A Twitter Chat or Tweet Chat is using Twitter to talk about a common interest with others during a preset time. It’s like an online chatroom where you add to the discussion by tweeting.” ~Twubs.com

It’s an opportunity for you to join other Assistants from all over the globe and learn from a different expert trainer in a variety of topics each week. It’s free.

Login to your Twitter account to participate. It’s best to use a Twitter management tool such as HootSuite, Tweet Deck, Twubs or TweetChat. If you are using HootSuite or TweetDeck, create a column for the hashtag #adminchat. Only tweets from the specified hashtag will appear in the column.

How to create a keyword column in HootSuite for #adminchat

Continue by filling out the Add Stream dialog box. Steps are shown in Figure 2. 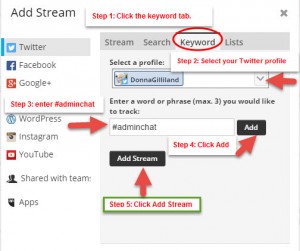 Once complete, an #adminchat Keyword column will appear in HootSuite. Only tweets with this hashtag will appear. (see Figure 3). 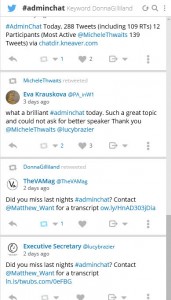 Click in the enter a hashtag field (see Figure 4).

Note: Twubs automatcially appends the # symbol. The Twubs #adminchat screen appears showing all tweets that have been sent using the specified hashtag.

You will need to login to your Twitter account to use Twubs, which you can do using the link within the message box. The message box is also used to post messages that you want to tweet during the chat. Each message you Tweet from within the Twubs platform will automatcially append the #adminchat hashtag to the message.

One of the advantages to using a Twitter management tool like Twubs is that only tweets with the associated hashtag will appear and you will have several handy tools, like the ability to slow the Twitter feed down and to pause it. 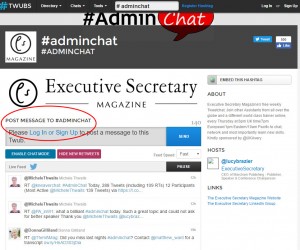 Notify your followers with a tweet, about 15 to 30 minutes prior to your chat, that you will be on a Twitter chat for the next hour and that your tweet stream might become very active. Remind your followers that they can mute notifications of your tweets during this time period.

Stay on topic within the chat. Post tweets that contribute to the conversation. Don’t have off side, off topic conversations within the chat. It creates distraction. Feel free to ask on topic questions. Remember, everything you are tweeting is visible to everyone else and you want to be remembered in a professional way. This is your chance to learn, network and build credibility.

When you tweet about a learning point, be certain to give credit to the speaker by referencing their Twitter ID with a mention. Example, @DonnaGilliland

Before you dive into tweeting, you need to make certain that you have a professional profile (see Figure 6). Your Twitter ID carries with you when you tweet. Make certain that you have a professional photo. Don’t tweet without one. Anyone can click your ID to view your Twitter bio. Your bio helps others to learn more about you. That’s not the only thing they can quickly click to see – they can view your Twitter feed, if your account is public. What do your tweets say about you? Are they helpful? 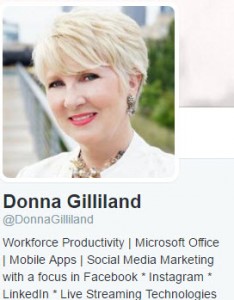 Take advantage of the large header photo area of your profile. As a business, it is a marketing benefit. As an individual, you can use it to give insight into a personal interest.

If you aren’t comfortable participating the first time around within a Tweetchat, you can always view from the sidelines by reading the tweets. You are going to learn either way.

Twitter is a learning and networking opportunity. It is an opportunity for you to showcase your expertise by what you tweet. Learning and career opportunities are in abundance on Twitter.

Donna Gilliland is the Founder and President of MOSTraining, Incorporated. She is an award-winning instructor in her field. Donna provides workforce productivity training and consulting in Mobile, Office and Social Media technologies. She has been a professional speaker and teacher in her field for over 25 years. Donna also provides social media business training in the strategic use of Facebook, Instagram, LinkedIn and video marketing. She is well known for her fun and results-driven training.